Unraveling Social Media One Tool at a Time 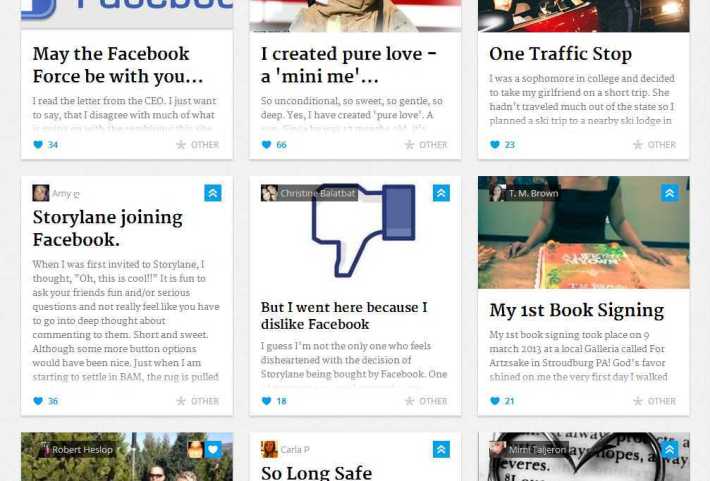 Storylane users are expressing their dismay and frustration over the platform’s recent decision to join forces with Facebook, underlining once again the lack of control we have over our social media choices.

“Just when I am starting to settle in (to Storylane) BAM, the rug is pulled out from under me,” writes one user. “I for one am not happy about this “Merge/Acquiree” with/of Facebook. I know that a few of my friends are not happy with it either.”  Meanwhile, Storylane sent out information  to its users Monday offering suggestions and tools for importing their stories to Facebook or other platforms such as WordPress and Tumblr. You can also download a backup of your stories.

The story-telling platform is no longer accepting new users, and will be shutting down according to Inside Facebook. None of these “transfer” options are ideal.  The platform – which encourages people to tell stories and ask others to tell stories about themselves – has its own unique character, and attracted a certain type of user (of course it also had its share of self-promoters). The whole point of the site, like all social media platforms is to share. But this site took sharing one step further because it prompted users such as myself to tell stories that they would not have thought about writing unless prompted by a fellow user.

I am a big fan of Storylane and of its CEO Jonathan Gheller, who I interviewed last November and part of me is like, who could blame he and his team for ignoring this opportunity. Still,  I am disappointed that the Palo Alto startup was unable to stay in the game and contribute to the diversity of social media options. It also makes me glad that I did not devote even more time to using Storylane because now I am stuck. I must move my stories or lose them.

One option  is to send them to my Facebook account. However, under that option, you move your stories to Facebook Notes, a relatively obscure feature on Facebook.  I have used Notes so rarely that I had trouble remembering how to access them. To find notes, click on “apps” on the bar on the left column of your profile page. Notes allow for longer posts such as Storylane stories which tend to be more in depth than Facebook posts. You can post notes and share them, but it is hardly a dynamic Facebook tool.

Since Gheller announced that his team was moving to Facebook, Storylane has been filling up with posts similar to the one with this headline “But I went here because I dislike Facebook.”   Another Storylane fan wrote this post explaining that he was happy to have an alternative out of the social media giant’s wide reach.

The ultimate irony is this Storylane user, who was inspired by Storylane to deactivate his Facebook account. ” I had around 2300 friends on facebook, and I knew only 300. The only reason I added people was to connect, learn from and feel acknowledged, but it is more of a placebo effect than an actual therapy,” he writes.

As a social media editor, I spend my days navigating the wide ocean of social media tools, and often complain that there are too many too juggle every day. However, when moves like this happen, it reminds me that while the ocean may be wide, it is often not very deep.

Time will tell if Gheller’s team can help make Facebook a platform that accommodates  storytellers who like the  man who wanted to divorce his wife. have shared compelling,personal stories.

As for me, I am going to think twice before jumping on the next social media bandwagon. It is just likely to land in Facebook anyway.

This entry was posted on March 12, 2013 by Deborah Petersen in Uncategorized and tagged Facebook, Social Media, Storylane.